One of the most popular search terms on Google currently is “IPTV VPN Router”.  IPTV (Internet Protocol Television) has been dubbed as the future of TV, making it possible to use your broadband internet service to watch TV shows; rather than traditional TV signal delivery methods such as rooftop antenna, satellite dish or fibre-optic cable TV.

IPTV is easy to install with apps such as Perfect Player and Smart IPTV can now easily be installed on Smart TVs (Samsung, Sony, LG), Mag Boxes, Zgemma and Amazon Fire TV sticks/boxes; opening up a whole new market for a complete TV package away from the mainstream suppliers such as Sky and Virgin Media.

With an IPTV VPN Router you can connect any device you use for IPTV; including Smart TV, FireTV Stick, MAG Box, Zgemma, Kodi Box, Droid Player, Android Box etc to a VPN and bypass any ISP blocks.

However, IPTV users in the UK are finding their access to IPTV is blocked at certain times .  UK ISPs such as Virgin Media, BT, Sky and TalkTalk are forced to block access to links that may contain certain streams.

Whilst there are multiple benefits to always using a VPN for all your internet usage, here are some specific to IPTV:

Privacy: Keeping prying eyes away from your internet logs is absolutely crucial in the current surveillance climate. Governments around the world are introducing new laws allowing them to log all of your internet traffic. Saying, “I’ve got nothing to hide” should never excuse your right to privacy. If you are watching IPTV then use a VPN and keep your logs private.

ISP Throttling: Using IPTV VPN can stop your ISP throttling your internet connection. Internet speeds of 5mb or more should easily handle IPTV streaming in HD without any buffering.  Buffering generally occurs for IPTV users because your ISP is seeing your heavy internet usage and throttling your broadband connection.  Whilst a VPN will slightly slow down your internet connection from your ISP maximum; it will never be throttled.

ISP Bans and Blocks: ISPs worldwide, and particularly those in the UK; have began blocking IPTV streams. This means that you might not be able to watch live channels with IPTV due to the fact that your IPTV providers links are blocked by your ISP. Connecting to a VPN Router will bypass such blocking, regardless of where you are in the world.

Liberty Shield run a a tier 2 level VPN network and our range of VPN Routers will allow you to connect any device, including SmartTV, Mag Box and Amazon FireTV to a VPN without changing any settings on the device itself. You simply connect your device to the VPN Routers WIFI or LAN and also save CPU resources on your FireTV or SmartTV.

We have sold many thousands of standalone IPTV VPN Routers in recent years and you can read hundreds of reviews on TrustPilot from genuine customers. 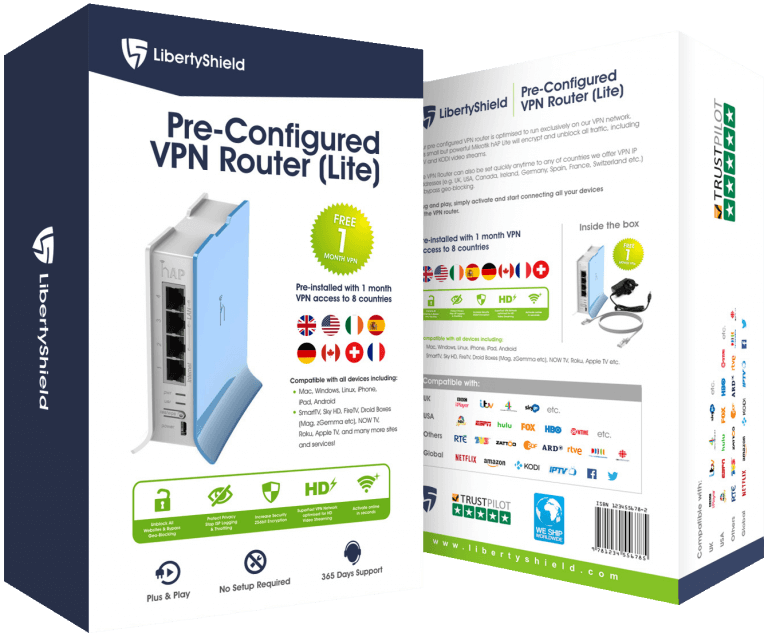 With this offer we will ship you an IPTV VPN Router (Mikrotik RouterBoard hAP Lite RB951-2n) which will be encrypted so it unblocks IPTV streams. The VPN Router can also be set quickly anytime to any of countries we offer VPN IP addresses (e.g. UK, USA, Canada Ireland, Germany, Spain, France, Switzerland etc.) to bypass geo-blocking.

You will need to add an ongoing VPN subscription from Liberty Shield, packages are available from only £6.99 per month or take advantage of our Exclusive IPTV Offer and get 1 year VPN access for only £49.99 (only £4.16 per month) at the end of your 1 month free trial period.

Of course IPTV isn’t the only censored streaming service a VPN or Proxy will allow you to access.  Other USA services available direct from the networks such as Fox Soccer 2Go, NBC Sports, Hulu, HBO, Netflix USA and Pandora are available! Or switch to a UK VPN Proxy and access BBC iPlayer, ITV Hub, All 4, Now TV etc.