Mike Williams from TechRadar wrote the review which you can read here: TechRadar VPN Router Review, his overall conclusion was as follows…

Whilst the review is fairly complementary in general there are a couple of points raised in the TechRadar VPN review verdict “against” the product which we wanted to address for both existing and potential new customers. 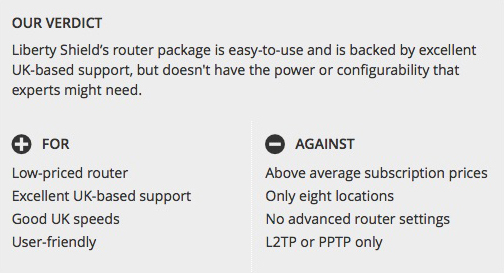 Firstly the issue raised in the TechRadar VPN review regarding the “clumsy” small blue book (Quick Start Guide) has already been addressed and any new VPN Routers shipped from our warehouse (as of December 2017) should include version 2 of the booklet which clearly highlights the need to activate your router before any SSID can be broadcast for customers to connect to.

By it’s very nature a VPN Router is designed to always be connected to the VPN network; allowing VPN support for devices that don’t inherently offer VPN connectivity as standard results in considerably more bandwidth than a regular VPN service would, for example the HD video bandwidth required for IPTV devices such as SmartTV, MAG Box, NOW TV etc. The bandwidth commitment and server infrastructure to support our VPN Routers carries a considerably higher cost than a software-only VPN network; we should know – we used to be software-only before the launch of the VPN Router.

Even taking all that into account our prices, even on a month by month basis at £6.99; remain comparable to the prices of our leading competitors.  There is also an option when activating your VPN Router for all customers to commit to 1-year of VPN access for only £49.99; which monthly is only £4.16 per month.

This is where we differ considerably to our competitors and the locations we offer are entirely based on regular consultation with our customers since 2008. Rather than invest in extra VPN country options our customers have clearly requested faster and scalable network infrastructure in the 8 locations we offer.  Being able to handle huge capacity at fast speeds in the UK and USA for example, over VPN sever options in say Antartica or Timbuktu (we’re sure they’re lovely places); seemed to make good practical sense.

This is another factor largely determined by our customers and their requirements.  A plug-and-play device by it’s very nature is designed to be simple and allow practically anyone to connect to a VPN from all their devices quickly and easily; crucial in particular for people without an advanced technical knowledge of VPN and networking.

That said, we do offer some advanced features for modifying your VPN Router; for example by logging in the customer area you can change the SSID name and WiFi password – you can also switch between L2TP and PPTP modes depending on your encryption requirements. An option is also available to set the closest inbound gateway server with the lowest latency and the closest to your physical location; ensuring the fastest possible VPN speed.

Customers who contact us via our helpdesk can also request changes to the WiFi channel number and/or disabling the wireless output from the VPN Router completely. We may consider adding these and other advanced management features in future for customer control.

L2TP and PPTP only

Offering these two methods of encryption has served our VPN Router customers well to date. That said we are always looking to expand on the available encryption options and, with ISPs (Virgin, TalkTalk, BT, Sky etc) intent on throttling speed on common VPN ports; we hope to add support for OpenVPN connectivity in the very near future.

Liberty Shield run a tier 2 level VPN network and our range of VPN Routers will allow you to connect any device, including your Smart TV, MacBook Pro, Chromebook, Microsoft Surface Pro, Fire TV stick, Now TV Box, MAG Box, zGemma, and Android Boxes to a VPN without changing any settings on the device itself. You simply connect your device to the VPN Router WIFI or LAN (via ethernet cable) and also save CPU resources on your device.

With this offer we will ship you a VPN Router (Mikrotik RouterBoard hAP Lite RB951-2n) which will be encrypted so it allows your Panasonic Smart TV to connect to a UK network. The VPN Router can also be set quickly anytime to any of the countries we offer VPN IP addresses (e.g. UK, USA, Canada Ireland, Germany, Spain, France, Switzerland etc.) to bypass geo-blocking.

Our standalone VPN Routers for Panasonic are not the only service offered by Liberty Shield. We also offer the same range of software based VPN subscriptions as our competitors and also the addition of access to our Proxy Servers.